11-kms from Ajmer (132 kms from Jaipur) on the edge of the desert lies the tiny tranquil town of Pushkar along the bank of the picturesque Pushkar Lake. This is an important pilgrimage spot for the Hindus, which has the only temple of Lord Brahma in the country and one of the few in the world. Lord Brahma is known as the creator of the world as per the Hindu mythology. It’s marked by red spire, and over the entrance gateway is the hans, or goose symbol, of Brahma, who is said to have personally chosen Pushkar as its site.

The lake has a mythological significance associated with it. According to myth, Lord Brahma was on his way to search for a suitable place to perform a “Yagna’ (a fire sacrifice) while contemplating, a lotus fell from his hand on the earth and water sprouted from that place. One of them was Pushkar where Lord Brahma performed “Yagna”.

As indicated by Pushkar’s position as the starting point of the grand pilgrimage, the worship of Brahma was considered highly important at the end of the first millenium BC. Pushkar is the only pilgrimage shrine dedicated to Brahma in all of India, and few pilgrims visit the shrine. The function of Brahma – creating the world – has been completed, while Vishnu (the preserver) and Shiva (the destroyer) still have relevance to the continuing order of the universe. Brahma is also a god of the Aryan invaders and during Vedic times his cult temporarily displaced the more ancient indigenous Shiva and Shakti cults. With the passing of the period of major Aryan influence, these deities reemerged more powerful than before.

The ‘Nag pahar’ or the Snake Mountain forms a natural boundary between Ajmer and Pushkar. Surrounded by hills on three sides, pushkar abounds in temples. Of these the most famous is the Brahma temple.
The holy lake has 52 ghats and pilgrim taking a ritual dip in the lake is a common sight.
Although a serene town, Pushkar bustles with life during the joyous celebration held on Kartik Purnima.
Every year thousands of devotees throng the lake around the full moon day of Kartik Purnima in October-November to take a holy dip in the lake. Huge and colourful cattle fair “The Pushkar Fair”, is also held during this time. Pushkar fair is well-known for it’s Camel trading and other attractive activities.
Dance music and colourful shops spring up during this fair. Also on sale are mouth-watering traditional delicacies. Colourfully attired village folk enhance the fun of the occasion.
A host of cultural event against the backdrop of this pretty setting is also organised including attractive puppet shows. Cattle auction and camel races are also a part of the festivities. 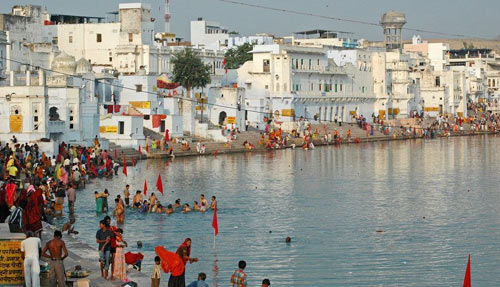