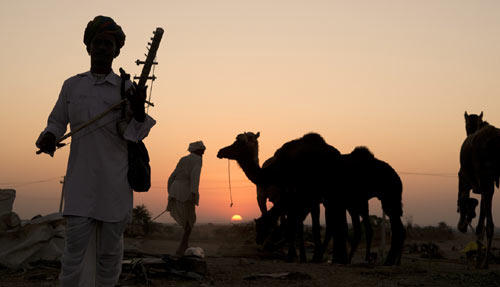 Every year thousands of devotees throng the lake around the full moon day of Kartik Purnima in October-November to take a holy dip in the lake. Huge and colorful cattle fair “The Pushkar Fair”, is also held during this time. Pushkar fair is well-known for it’s Camel trading and other attractive activities.

Activities
Dance music and colorful shops spring up during this fair. Also on sale are mouth-watering traditional delicacies. Colorfully attired village folk enhance the fun of the occasion.

A host of cultural event against the backdrop of this pretty setting is also organized including attractive puppet shows. Cattle auction and camel races are also a part of the festivities.

History
Pushkar is among the five Dhams or pilgrimages that are held in high esteem by Hindus, the others being Badrinath, Puri, Rameswaram, and Dwarka.
It is said that in battle lord Brahma killed the demon Vajra Nabh with a lotus flower, whose petals floated down to earth and landed in three places in and around Pushkar where lakes sprang up. According to legends, Pushkar Lake was surrounded by 500 temples and 52 palaces (several rajas and maharajas maintained palaces here for pilgrimage) at one point.

The Brahma temple is the most important temple here and is, in fact, the only Brahma temple of India. It is interesting to note that Brahma is not worshipped, even though he is one of the Holy Trinity of Hinduism. Brahma, it is said, had descended on earth to perform a Yajna (fire-sacrifice). His wife Savitri was not with him at that time and the Yajna would be incomplete without her. Therefore, Brahma married a local girl and sat down for the Yajna. Meanwhile Savitri landed on earth and, upon finding this new bride sitting next to Brahma, cursed him that he would never be worshipped anywhere else on earth.
Pushkar city guide and travel information

Getting there
By Air
The nearest airport from Pushkar is Jaipur. Jaipur is well connected to all the major cities which includes Delhi, Mumbai, Calcutta, Jodhpur, Udaipur. Recently, flights to Dubai has also started from Pushkar by Indian Airlines.

By Bus
Pushkar is 11 km from main Ajmer bus stand. Rajasthan Roadways run very comfortable deluxe & air conditioned buses from Jaipur. There are buses from Jaipur to Ajmer every 15 minutes, some nonstop. The roads are very good, and it takes around 2 hrs from Jaipur. You can also come by taxi.

By Train
The nearest railway station for Pushkar is Ajmer, which is on the Broad Gauge and hence connected to all the metro cities of India. There are daily trains from Delhi in morning (Shatabdi Exp) and evening (Intercity Exp).

Getting Around
Pushkar is a relatively small town and easy enough to get around on foot There are no auto-rickshaw in the town center. A bicycle is best to get around.

Shopping
Pushkar main bazaar is a tangle of narrow lanes lined with an assortments of interesting small shops.

Things to do
Each year, up to 200,000 people flock to Pushkar for the Camel Fair, bringing with them some 50,000 camels and cattle for several days of pilgrimage, horse dealing, camel racing and colorful festivities.
The Rajasthan tourist office has promoted the fair as an international attraction by adding Rajasthan dance programs and other cultural events and by putting up a huge ten city for the Indian and foreign visitor.

Temples
Pushkar boasts temples, through few are as ancient pilgrimage site many were destroyed by Aurangzeb and subsequently rebuilt. The most famous is what is said to be the only temple in India dedicated to Brahma. It’s marked by a red spire and over the entrance gateway is the Hans, or goose symbol, of Brahma, who is said to have personally chosen Pushkar as its site. The Rangji Temple chosen is also important.
The one – hour trek up to the hilltop temple overlooking the lake is best made early in the morning; the view is magnificent.

Ghats
Numerous ghats run down to the lake, and pilgrims are constantly bathing in the lake’s holy waters. If you wish to join them, do it with respect – remove your shoes, don’t smoke and don’t take photographs. This is not Varanasi and the pilgrim here can be very touchy about insensitive instruction by non – Hindus. 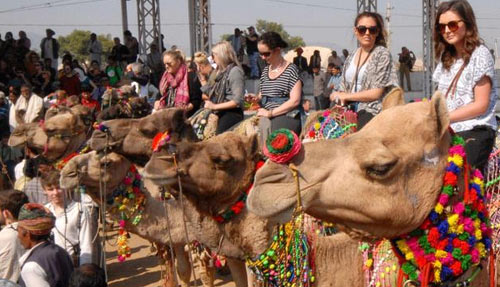 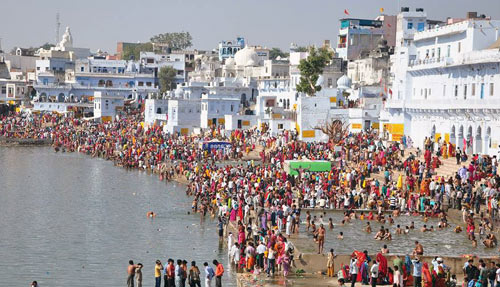 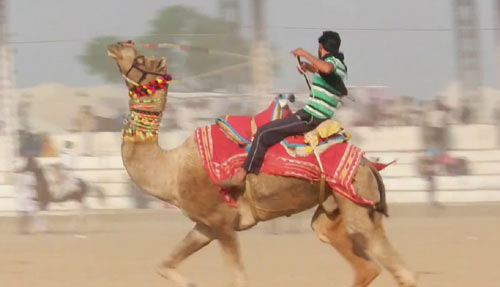